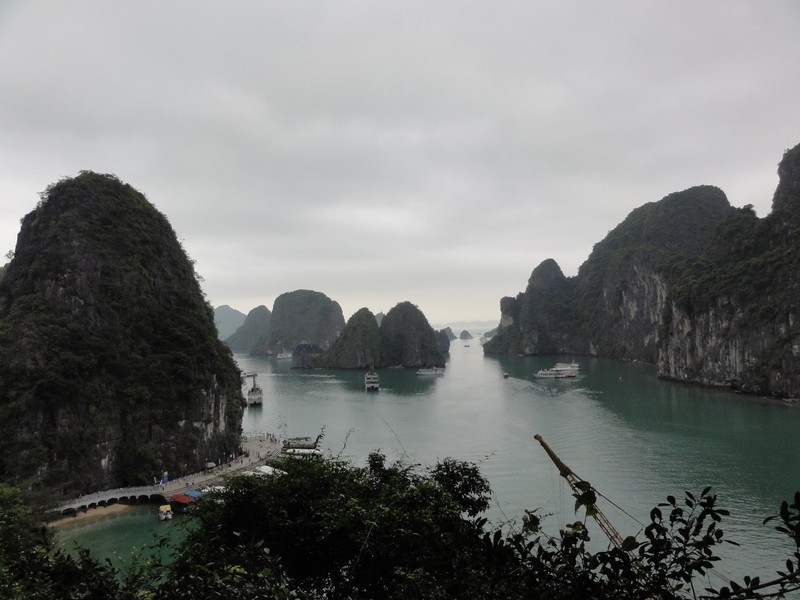 All good things must come to an end – or so the old cliché tells us.

Our driver whisked us as quickly as the traffic would allow from the cruise terminal at Ha Long to the Ha Noi International Airport – domestic terminal. One halt along the 3 and a half hour journey we had a well-needed loo stop. While waiting for LadyGaw, I went into a small supermarket like store trying to find something to eat. I bought a box of sesame seed 'cakes' for want of a better word, that I think were packaged up for offerings at temples – or so it looked from the outside. I must say they were quite tasty.

Like airports everywhere, Noi Bai International is a busy bustling place. Our driver managed to get as close as was possible to the entrance to the domestic section, where we unloaded our bags, said a grateful, 'Xin cam on' (thank you), and entered the terminal – which was undergoing renovations.

I found an inquiry counter and explained that my wife really needed assistance owing to her leg. I was directed to a special check-in counter. From then on we were overwhelmed with really great service and I cannot thank Vietnam Airlines enough. It took a little bit of time to arrange a wheelchair and while we waited, the check-in counter staff member found a chair for Sandra to sit on. Eventually a porter and wheelchair arrived and we were taken through security and then into a waiting area. 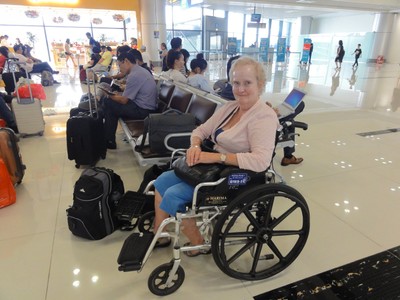 Approaching boarding time, another porter came along and took us through a special door and into a module like contraption. This was lowered to ground level and we seemed to travel for many kilometres dodging aircraft before arriving at a Vietnam Airlines aircraft parked at the International Terminal. We watched in awe as the module was raised to a closed door of the aircraft. The operator then proceeded to knock loudly on that door. After considerable knocking, a hatch opened and our operator/driver was able to open the door to let us in – to business class!!!! We'd been upgraded and I just wished I could get to say thank you in as many languages as possible to the check-in lady who made it all possible. 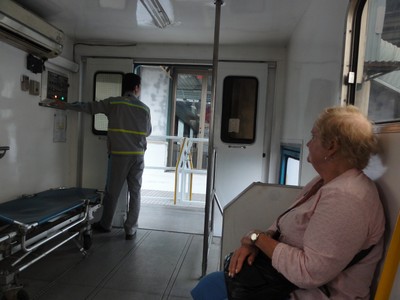 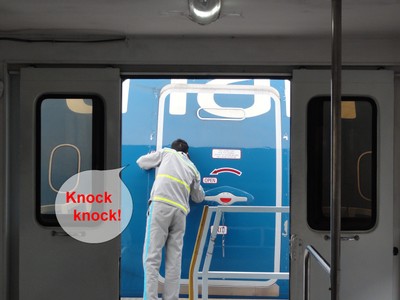 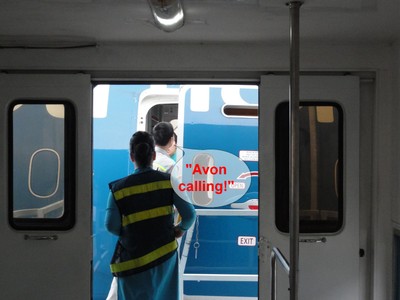 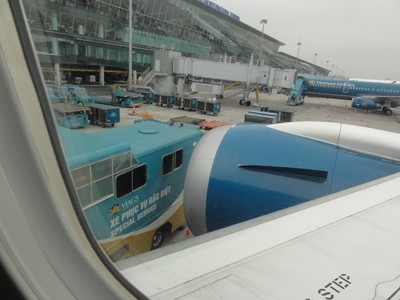 Thanks 'Special Services' and all at Vietnam Airlines

We had to transfer from the domestic terminal to international at Saigon's Tan Son Nhat International Airport, which is a reasonable walk. LadyGaw was fine with that, she just relaxed in the wheelchair. The guy 'driving' the chair must have been practicing for some sort of Olympic event and I had trouble keeping up with him. Going through security at the international terminal, I inadvertently left my Dong Chi ID in my pocket. Naturally all the metal attracted attention and when I opened it up, the smartly presented uniformed police (I think) woman stood to attention and said 'Sir.' (see Introduction – Hello Comrade). Without any further complications I was allowed to go through and surprisingly we were taken through the Diplomatic Passport holders section at Immigration. Amazing what a wheelchair can achieve. 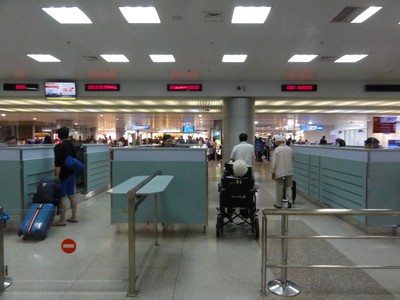 Sadly our luck ran out and we were seated as originally booked in steerage, err economy, class for the 6 hour journey to Melbourne.

More special treatment and this time compliments of the QANTAS ground staff who look after the needs of other airlines as well as their own. This time it was a motorised small vehicle that took another wheelchair bound passenger, LadyGaw and myself through the various formalities.

Eventually out into the cool morning of Melbourne, where we meet up with our daughter, who had come to take us home and a warm welcoming home 'chirp' from my little feathered parrot (cockatiel) mate Zorro. The holiday, err trip, was over. 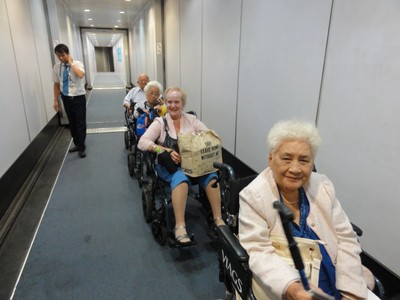 If you have read the entire blog, thanks for coming along for the ride We'd love to return to that country.

The real high point was Tam Coc and we will never forget the wonderful staff at Ninh Binh Hidden Charm hotel. Not forgetting for a single moment, the great Hanoi La Siesta Diamond Hotel and Spa in Ha Noi and to Mr Nguyen and staff at the Sapa Dragon Hotel.

The cruise was memorable, but in hindsight I think I'd prefer the 'Ha Long on Land' – Tam Coc.

The currency of the country took some getting used to with a bill from a restaurant or hotel seemingly so large they resembled phone numbers. We loved the food – so refreshingly different and the Banh Mi, the clever blend of Asian food wrapped in a French baguette.

Big cities are big cities where even you go. Sai Gon was just that. However Ha Noi even with the big population didn't seem the big city like its southern 'rival' and particularly in the area we stayed – the Old Quarter. Again Tam Coc was small and did not have the big city problems.

Perhaps the only real downsides was the seemingly endless construction in Sapa and most of the taxi drivers we came across. Not I must say, except in one case, those from Mai Liah or Vinasun. With 26 years experience in the taxi industry in my own city, I did have some insight and therefore was able to avoiding being scammed. 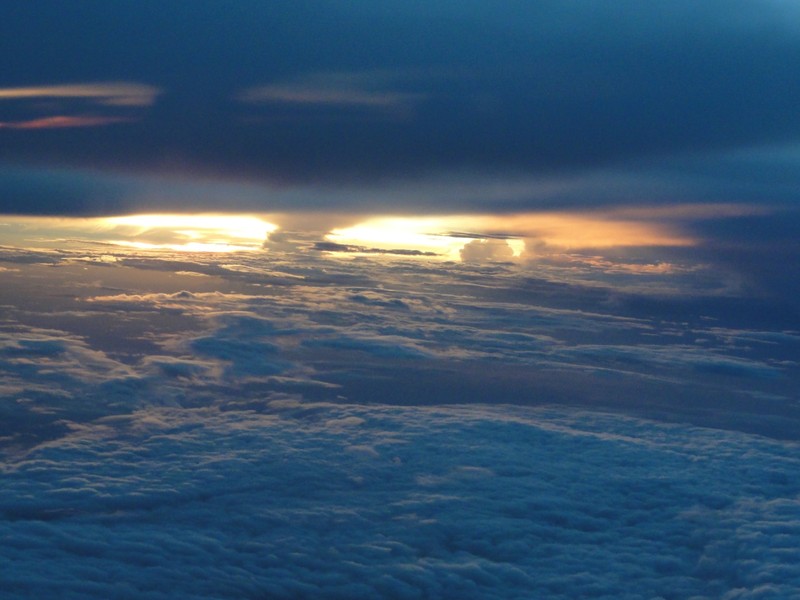 Dramatic music playing in the background as we say farewell to another holiday – err trip. Thank YOU for sharing our journey in Vietnam

Posted by SirGaw 23:59 Archived in Vietnam

Comments on this blog entry are now closed to non-Travellerspoint members. You can still leave a comment if you are a member of Travellerspoint.

If you aren't a member of Travellerspoint yet, you can join for free.